Papiliorama’s primary mission is to bring visitors into direct contact with natural diversity, so that they can marvel for a few moments at its beauty and become aware of its fragility everywhere on earth. While major exhibitions are dedicated to the tropics, from butterfly ballets to night animals and the toucan jungle, the Papiliorama Foundation also makes many efforts for nature in Switzerland.

Since its installation in Kerzers, the Foundation has revitalized nearly half of its outdoor area. It has been able to revive a stream channelled for more than 50 years, recreate a natural pond, flowering grassland, woodlands, and more recently a large wetland floodplain, all this with indigenous species. Its “wild” parking lot, with a bare minimum of asphalt surfaces, is planted with almost all the tree species of the Swiss plateau and surrounded by hedges with 18 shrub species. Several rare bird species now nest there. 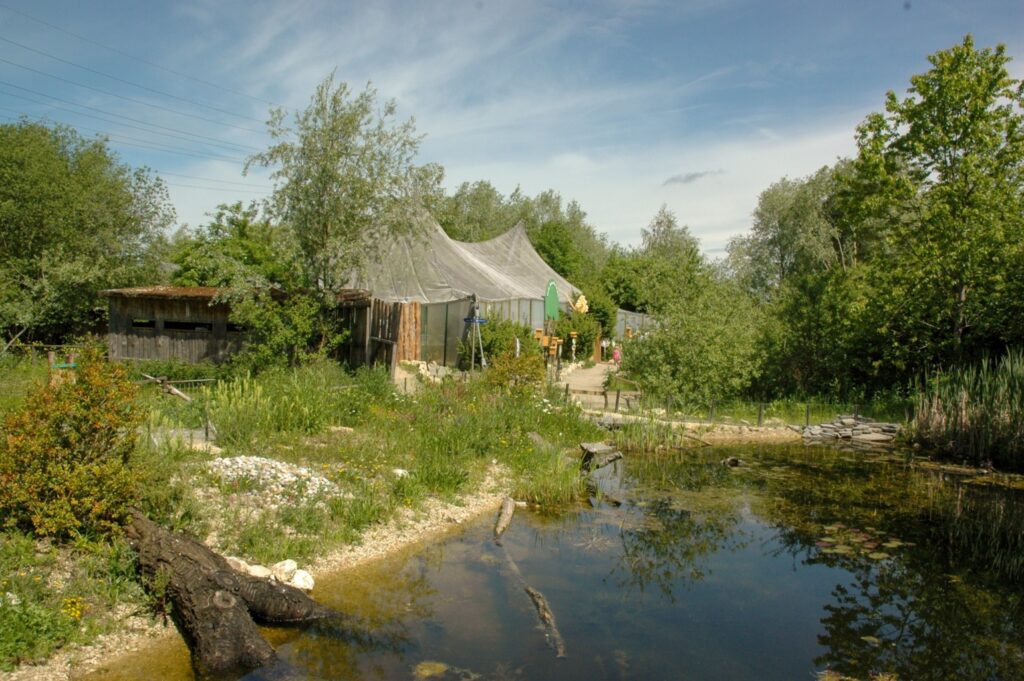 Papiliorama is also very active in the Swiss project to reintroduce and strengthen the populations of the European pond turtle, the only indigenous turtle in Switzerland. Papiliorama participates directly in the project through a breeding station behind the scenes and a pond and educational exhibit in the visitor’s area. Through the Swiss Association of Scientifically Managed Zoos (zooschweiz), it also provides a substantial part of the project’s funding.
Previous
Next

Butterfly conservation at the Vully

Papiliorama is also involved in the long-term management of a particularly butterfly rich meadow at the foot of Mount Vully.

Finally, the Papiliorama Foundation collaborates with many other Swiss nature conservation institutions and organisations, for which it is often happy to act as a platform.

Our environmental conservation project in Belize

The Papiliorama Foundation has been involved in the conservation of tropical forests for several decades. In 1989, it initiated a large-scale conservation project with the creation of the Shipstern Nature Reserve (88 km2) in Belize, Central America. This nature reserve is now a trust in perpetuity and an integral part of Belize’s protected areas’ system.

In 2013, Papiliorama also made it possible to safeguard two national reserves that were seriously threatened by lack of protection. Today it manages the Freshwater Creek Forest Reserve (130 km2) and Honey Camp National Park (31 km2).

In 2018, after several years of intensive work, Papiliorama and its local NGO succeeded in creating, in partnership with the government, the first major biological corridor in Central America (110 km2), which now links all the reserves they protect.

Thus, Papiliorama today protects nearly 400 km2 of tropical nature, in a region where deforestation is in full swing.

The Foundation provides non-financial resources (working hours, premises, etc.) for this work and covers all fundraising costs. The reserves annual budget, in the order of CHF 360 000 per year, is covered by adoptions of hectares by visitors to Papiliorama, and by donations from other European zoos, including the Royal Zoo of Burgers in the Netherlands, a partner in the project from the beginning. The funds are managed by a sister foundation of Papiliorama, the International Foundation for the Conservation of Tropical Nature (ITCF).

The Papiliorama Foundation participates in other nature conservation and scientific research projects. In collaboration with other institutions, it has set up the “Save Homerus” project to save the largest swallowtail species in the Americas in Jamaica (see also IABES). It also occasionally supports other projects for the conservation of specific species or nature in general, often in connection with the species it hosts in its exhibits in Kerzers.

We protect 400 km2 of tropical forest in Belize.

Support us in this!